A group of people gathers to play some board games.

A proof-of-concept prototype that's more of an engine test than a game.

I gotta say, despite this being technically unfinished, there's a whole lot to love about it. The character creation part is super fun and in-depth, and I love that you can just make a random character based on some simple parameters. The tone of the writing is really fun and engaging, to the point where I don't even care that I can't play them games. It's just fun to look over these old relics that a friend found and no one can make real sense of.

Overall, the idea of a game based on a failed game night (we've all experience those, I'm sure) is super interesting. I know that wasn't the intention of this game, but I think it's a concept worth exploring. What happens when you set out to play a game and fail to get it together, or can't make sense of the rules, or lose interest, or what have you? Lots to explore there.

Weird to say, but I think I might like this better if the board games are never fully operational. Great job all the same.

Thanks a lot for the feedback and the kind words. Reading your notes and Clyde's it occurs to me that "brokenness" of the game is thematically important. Now, you might be saying that just to be nice, but it's no coincidence that the name "Vangrolion" is based on the computer game "Vangers" an incredibly esoteric alien racing RPG that I never played more than a few minutes of at a time before giving up in frustration but still deeply love.

At the beginning of the jam, I tried to come up with a list of "player experience goals" since Danielle's always talking about the importance of them, but I didn't really know what I wanted players to experience. If I were to repeat the same exercise now, I'd say that I want players to have a shared experience with the NPCs of unpacking these impenetrable but tantalizing artifacts and making them into living games.

One of the inspirations for this is the card game "Mao" which is basically a game about figuring out the rules of the game. I actually tried to make a computer game out of Mao a decade ago, but failed to get anywhere with it (possibly because I didn't really have a clue how Mao is actually played). At any rate, I've retained a fascination for Mao and Calvinball and other games about inventing the game as you go. It would definitely be easier (and perhaps a better player experience) to avoid programming the minigames and simply use them as a narrative device in a visual novel, but it was important to me that players really do get to participate in playing and shaping these games.

In the original plan for OhBoyOhGosh, players would start combining decks of cards from various games together after the first game (shuffling different decks together is even technically implemented in the jam release, though of course that feature is never used). I hadn't thought of it in terms of a "failed" game night exactly, but I could see how it'd be fitting if some of the motivation for adding crazy rules was because the original game wasn't working.

When the Jam ended, I really wanted to get back in and fix the game to make it playable. Now that a bit of time has passed, I think I prefer leaving this version alone, since it really is the best I could do for New Jam City. I am, however, planning a spiritual successor with a different name.

I enjoy the character creator, the framework that Erin presents, and the individual board-game concepts.

This was a lot like my real-life experience with board games where I enjoy the art, themes, and figurines and artifacts of ritualism, but I completely zone out while the rules are being explained and I just want to be like "I'm ok with losing the first match, let's just play."

I enjoy digital board-games where you get a sense of the characters you are playing with while playing. Poker Night at the Inventory would be a good example.

I also enjoy learning board-game systems through digital platforms when the art and themes interest me a lot. Gremlins Inc. is one I enjoyed figuring out through hours of play and losing.

Your experiences match up pretty closely with what I was expecting. In my ideal version of the game, I'd avoid the rule dump by having the games be extraordinarily simple to start then adding in "house rule" rule changes throughout the game. The original concept for the game was that the game would evolve over time as the group kept making "sequels" to a base game. Winning/losing wouldn't matter too much at first since the game would be almost entirely luck based, which is why I wanted to do the Poker Night at the Inventory thing of making the main draw be the conversation around the game.

Ultimately, most of that didn't make it into this prototype since I started programming card rendering last night and didn't get to gameplay programming until after midnight. By the time I was coding the 'real' game, my brain was already effectively mush. The character creator represents at least 90% of the time spent on the game, which is why it's a little more polished. 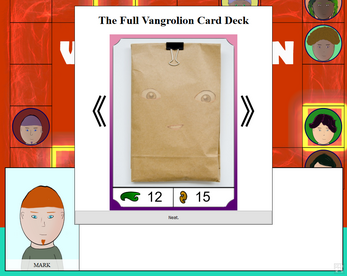